My past few blogs were focused on the exile commandment for Shri Ram and different perspectives had been showed since. We all know what happened at last; in spite of all the labor Bharat did to make sure Shri Ram's comeback, he had to accept what was already scripted by the almighty.

According to Valmiki Ramayan; before giving in, Bharat left no stone unturned to ensure Shri Ram's crowning. He sat on strike to change his decision, he even volunteered to live the exile in Shri Ram's place, Everyone watching the brothers debating for each other’s good was overwhelmed; not just the civilians, even the scholars were bemused. Both of them were right with their set of rationale, one brother was setting highest standard for truth, honor, pride, responsibility for an ideal son whereas another brother was himself an idol of a true brother whose love, devotion and adherence mesmerized everyone.
Shri Ram was dazed with Bharat's persistence but refused to revoke their late father's command. Vashishth for the first time was in a perplex as what to say and whom to support as both were royalties and right on their part.
It was that time when the cosmic sages decided to intervene, they were aware about the prophecy and

Narayarn’s incarnation and the very motive of it; Raavarn’s end. They reminded Bharat of his late father's commitment and the condition put by Kaikeyi(only Ram had to live in exile).

Bharat's plight was pitiable, with a heavy heart and tears in his eyes he asked Shri Ram to step on a pair of gold plated sandals for once as  a symbolic gesture of his presence in Ayodhya. He bowed before the sandals and announce that for the coming fourteen years, those sandals would be placed at the royal throne and he would serve the kingdom affairs staying in Nandigram.


So this was the unforgettable legend of Bharat; no brother had been like him till date, he had shown world the real devotion towards a brother. He stayed complete 14 years in valkals and jatas, served the sandals as a king and looked after the kingdom efficiently.
Whoever listens this part of the legend, praises Bharat for his unconditional devotion. Still there are minds who tend to think different, I sincerely thank them as it is their curiousness that a fairer picture of Ramayan comes out every time a query raised.
"Did Bharat had those gold plated sandals(chararn paduka) along with him all the time, when he was confident for his efforts why did he brought them, was that on purpose?" 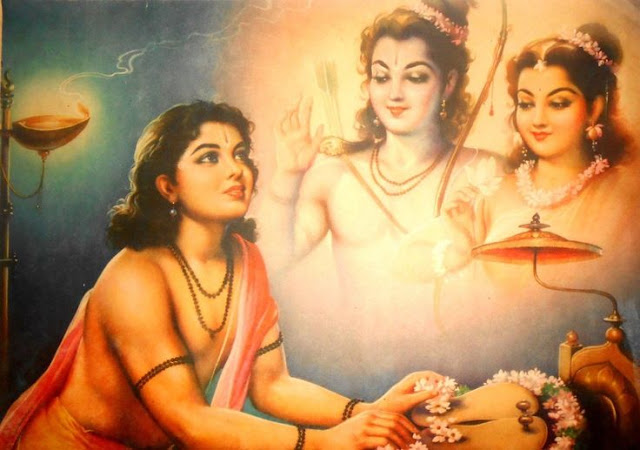 Certainly a big NO; he was Shri Ram's brother, he had the element of Narayarn, doubting his intent is as pointless as doubting Sunrise, no matter how dark the night is, it is bound to happen.
He never ever aspired the throne, he always visioned himself serving his elder brother the way a devotee does. But he also knew Shri Ram; he saw a minuscule chance of his success and for that he decided to play against all odds. Kaikeyi put the exile condition very cleverly, it couldn't be revoked and Bharat tried to counter it by offering a switch(he living the exile in Shri Ram's place). Whether he would succeed or not, he needed Shri Ram's graciousness in either condition and for that he took those golden sandals with him; if Shri Ram would have agreed to Bharat's request, then also he would have requested Shri Ram to step on those sandals so that he can live the exile worshiping them. Inside, he knew the rarest chance of it and that's what happened, those sandals acted as cicerone in running the kingdom.

That's the affection and sanctity an ideal relationship demands; so out of touch in present times ain't so, well that is the reason of our miseries too. We cry foul for our sufferings alleging others when we ourselves are not honest(neither with others, nor with ourself). The world doesn't need a hero, it needs trueness and compassion in every individual's heart and mind. Within moments, the new year will arrive bringing new hopes and happiness. This new year; be yourself, be humane.