"Aryaputra, you are a virtuous man, an idol for the entire civilization. But, if given a thought, you are following adharm, though you are far away from any grief and lust so you have a choice to escape this adharm. I honor and respect you with all my heart that is why I am preaching you about it; hunting the demons without any enmity or killing any being without any cause or offence is not dharm. We are in exile and violence is totally a contrast subject"
{Valmiki Ramayan; Aranya Kaand; Chapter:9}

Its very rare to come across with such conversations. A wife preaches her husband; whom she respects the most, that too about his duties involving righteousness. Only a woman who is well versed with scriptures and is aware of dharm can do so. But that's our heritage, a wife had all liberty to express her opinion as well as to counsel her spouse, if she felt the need for so. Here the woman I am mentioning is no one else but Devi Sita. A true companion without whom, the sole purpose of Ramavtar; extinction of Raavarn, wouldn't have been possible.

The reason why Ramayan is not just about Ram, but SiyaRam: 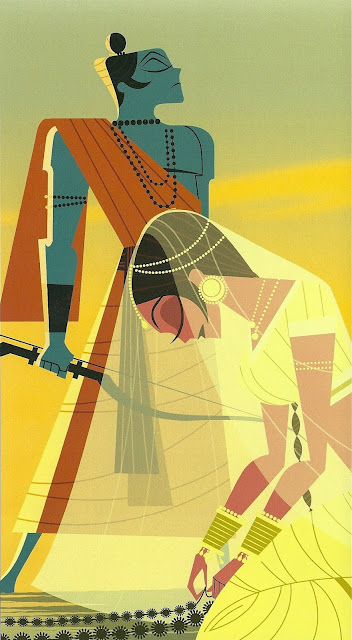 
Let's see what Valmiki Ramyan says about her:

Devi Sita's appearance is briefly described in the Valmiki Ramayan. Her resplendent contour was unmatched to any woman of that era. When Shri Ram annihilated Khar, the latter's commander, Akampan reached Lanka and informed him about Sita's enchantment, he advised to abduct her in order to avenge Khar. Raavarn himself was dumbfounded when he saw the first sight of her and appreciated her unparalleled beauty.

She was a firm woman with an unbowed attitude. A profound scholar who had excelled in vaidas and scriptures. Like the culture in those times, she had complete liberty to give her opinions, on the same time she was humble and respectful to her elders and caring to the youngers. Her love and devotion towards Shri Ram can be understood by the incident as when Shri Ram informed her about the exile and asked her to be in Ayodhya, she almost burst out at him with the fear of being distanced from him.

While in the exile, she stayed devoted to Shri Ram and when he promised the sages protection from the terrifying rakshasas, she didn't hesitate to preach him(her only concern being, if anything might happen to Shri Ram in spite of being aware of his vigor). Another illustration of her intellect was there in the Sunder Kaand, where she expresses her plight to Hanuman in a manner that an educated person does. Hanuman himself was an acclaimed scholar and not everybody could converse with him for longer. But Sita ji, in spite of her sorrows was able to converse with him about the situations.

But her prominence came during the golden-deer episode, where the real twist happened. When Mareech was eliminated by Shri Ram and the demon shouted Sita's and Lakshmarn's name in latter's voice, she asked Lakshmarn to go for Shri Ram's help. Lakshmarn tried to explain that no one in the world could harm Shri Ram. There, in order to send Lakshmarn away from the hermitage and to make her abduction successful, she turned into someone that shocked Lakshmarn. She alleged him of being Bharat's agent and reprimanded him for not helping Ram. She went so negative that she even charged him for having an bad eye on her. Hurt, Lakshmarn left the hermitage and went to look for Shri Ram.
Devi Sita never doubted Lakshamrn, but to make her and Ram's plan work, she had to do so, else Lakshmarn would never left her form his sight. This was proven when Raavarn came in the sage's guise, Sita ji gave her introduction along with Shri Ram Lakshmarn and regarded the latter for his devotion.

Yet Sita's character had been portrayed week and timid by many, perhaps they never understood her ploy. She remained unmoved and determined in spite of Raavarn's riches and the threats he posed on her. She even rebuked the demon-king at times being firm on her devotion. That is the reason why she refused Hanuman's request to carry her to Shri Ram. She remained in Lanka and watched the fall of the Rakshas-Empire till the end of Raavarn. She even saved Hanuman from getting burnt during Lanka-Dahan, how, we shall discuss later.

The legend of Sita has more aspects that cannot be covered in a single post. We still have a lot of questions that remain unanswered. Who is she in actual; 'aadishakti', Lakshmi or Vaidvati, are these names identical or was she someone else. But to understand it, we need to understand the Ramayan further  with its characters and dharm. We will surely find our answers in one of my forthcoming posts, we will also examine the episodes of Agni-Pariksha and Vaidvati and found our answers in near future.
Till then, be proud; we deserve to be.

Here, the first season of Ram-Janki series is concluded. I am thankful to you from the bottom of my heart as your love and support has made it possible for me to go on with the legend of SiyaRam. We will get started with the next season soon, until then, you may connect with me anytime.

My book is available now on Amazon for your read. Go for it and get amazed with this new cognition. Geography doesn't matter as it is available on every domain of amazon. 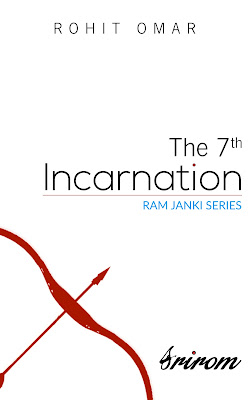