Welcome All! The second season of Ram-Janki Series starts today. Needless to say, the blogger in me was anxiously waiting, to resume sooner. Not just I missed blogging; but this platform, that puts me in person with you dear readers. And that's the advantage of being into this platform; face to face with any/every individual, irrespective of the geographical conditions.

This long interval that I took from blogging was caused by not one, but two reasons:

1.) The sequel to my debut book, The 7th Incarnation was in progress; and I must say, a lot of revelations await to daze your minds. This current blog season that starts today will be based on the sequel, so stay connected. The book will be soon on the floor for your read. 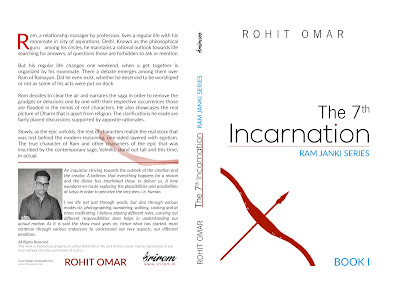 2.) Besides working on the sequel, I was also focused, marketing my book. In this process, I explored various measures, conventional and unconventional to enhance the visibility. I would like to thank all from the bottom of my heart, for your love and support, as the book's receiving positive reviews. The feedback I am receiving through mails and messengers is overwhelming; and yes, the book is going places.


We will start, from where we ended the first season; where many myths and misconceptions were broken, a lot of disinformation, was finally disproved. And we will continue to strive for truth through forthcoming blogs.

Let's start with the kingdoms of Vaanars, Kishkindha. After Devi Sita was abducted; during their search for her, Shri Ram & Lakshmarn confronted Kabandh, who advised them to befriend Sugreeve, guiding them towards Kishkindha.

Kishkindha's actual description comes at the later stage of the Kishkindha Kaand, when Lakshmarn reaches the kingdom, after Sugreeve's failure in fulfilling his commitment. Kishkindha, the cavernous city, held the same stature among the vanar kingdoms, as did Ayodhya among the human kingdoms; the Prime. It was ruled by the great Bali, twin brother of Sugreeve and son of Indra.

When Lakshmarn visited the vaanar kingdom; he was astonished to witness the opulence. He had never visited any such place, nor heard much detail about it. To his awe, the city looked much civilized than he thought off, contrary to the flickering in vaanars’ nature. The view of the city was lavish; he saw temples that were dedicated to various deities, gurukuls for aspirants and shops at regular places. Being situated amidst mountains, lush greenery and cultivated fields were obvious in that place with trees that bore juicy fruits. The streets were clean and broad. Everyone seemed pleasant there, he saw vaanars ornamented with gold and precious metal, houses in a colonial system and multi-storey palaces of the ministers of Sugreeve. That day, he could identify with the common ancestry they shared.

Observing the city’s majesty, he reached Sugreeve’s palace. There were seven antechambers that lead to Sugreeve’s room. He witnessed luxury while crossing those antechambers. There were abundance of precious stones and gold those were apparent with the city, being beneath the mountains. They were infused everywhere, the pillars, seats, carved windows, utensils and what not.

Soothing music was played with musical instruments, singers were singing in a balanced tone.


Beautiful women ornamented with gold and pearls, flowers tied on their hair were augmenting the charm of the royal palace. Beureaucrats and individuals looking after the kingdom’s administration were genteel on their conduct and looked contented.

The purpose, to put such and much detailing is to give another account of the Vaanars, that according to our beliefs were raw, unstable and rustics. Their lifestyle was no less ordinary, like the other species; humans, asurs, yakshas for instance.

The kingdom in modern times, can be identified with the regions around the Tungbhadra river (then known as Pampa) near Hampi and belongs to Koppal district, Karnataka. The mountain near to the river with the name Rishimukha where Sugriva lived with Hanuman, during the period of his exile also is found with the same name.

Like I always insist; "Before building a perception, let's keep our rational eye open"

Nothing was mere fiction, but real, we just need to perceive, the how's. We will continue our next blogs, knowing the Vaanars.

Tomorrow is Christmas, and the next big event to follow; New Year. Celebrate the spirit of Christmas, with the message of Christ; be good. If we assimilate these two words; everything, every deed of ours will be towards positivity, towards the righteous.

{Visit www.srirom.in to access my social profiles and The 7th Incarnation}
Posted by Rohit Omar at 10:10 PM