They say good habits never leave you, especially when they undergo a change, developing into passion. Being away from blogging was never easing and i felt the urge to type, to continue presenting the actual perspective of SiyaRam-Katha, clearing the misinformation that was backed by unscrupulous agenda. My last blog was published on 24th of December, 2016; initiation of season-2. Yes, been around five months since; my apologies for the extended interval. I will make sure my posts are available for your read sans long breaks.

Recently I associated with Sagar World, as content writer, managing their pages @ Facebook. I am also editing their monthly newsletter as well. Do subscribe to keep yourselves updated with the buzz form Sagars. Explore the world of mythology, astrology along with our heritage: 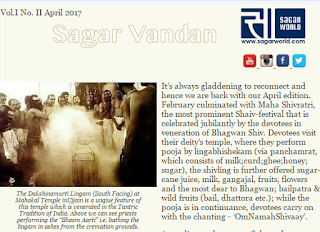 My last post depicted the historical kingdom of Vaanars; Kishkindha, as described in Valmiki Ramayan. Today let's discuss the legendary inhabitants, who contributed to the legend with their brains & brawn; The Vaanars. Let's excavate deeper; to explore origins of species Vaanar:

The word vaanar comprises of two words; van+nar, where van means forest and nar means man, hence vaanar means inhabitants of forest or forest dwellers. These people were not based to a particular region and had several tribes (mostly in southern region), yet they were unified under one dominion; Kishkindha. Characteristically; they were free spirited known for their muscular physique. They didn't rely on weapons; their tooth and nails were trenchant enough to lacerate the enemy in one blow. Their rituals and traditions were similar to Aryavart's; though the rigidity was much low compared to the humans.

If you can recall my evolution blogs from season-1, where we learned about the Prajapatis, and Sage Kashyap. He was the last Prajapati, progenitor of various species, including vaanars through Dakshayanees, daughters of Daksh. These women were the foremothers of devas, daanavs, maanavs/humans & vaanars as well. Vaanars are said to be descendants of Hari, daughter of Krodhvasha & Kashyap.

But their existence is seen with much suspicion constituted by many reasons:

If we look at the vaidas or other scriptures, there actually ain't any description. However, their existence can't be discarded completely in absence of their chronicles; perhaps there wasn't much to account, and when there was, we know their role in Ramayan. Their entity can't be denied in absence of history.

Though we doubt them due to their mixed traits of humans and animals; may be, this species belonged to some unspotted genus, which was somewhat related to homo sapiens or neanderthals. There's yet a lot to be discovered and learn by humans of our antiquity.

Where are they now - may be they lost to "survival of the fittest" with the tides of time, shrinking gradually with the expansion of human civilizations. One major reason behind their identity lacking archaeological evidence:  it could be the fact that vanars, like humans, too cremated their deceased ones. There are newer discoveries and theories everyday; possibly one day with technology & excavation; their traces could be found.

Considering the tales of vanars that have critical role in the epic of Ramayan, the assumption: they were a myth, has to be written off.

We reasoned the above suspicions; there are also some assumptions that support their existence:

The second assumption lacks solid grounds due to the above stated, also if for once we believe that the tribal people used artificial tails; how could they probably perform the foremost tasks with such appendages (the tail, as well as the fur body and masks).

They were created for a purpose on Brahmm Dev's directives, fathered by the mighty devas. This theory has garnered much support and looks admissible hence, after the suspicion and assumptions raised. But we must also see that the vanars had the ancestral lineage that was initiated by Kashyap & Hari: for instance- Kesari, Hanuman's father & Rikshraja, father of Bali & Sugreeve.

We have seen and discussed the suspicions and assumptions, followed by their probable explanations. Now, I would like to narrate a legend from Satyug, that according to me, is by far the most eminent argument in favor of Vaanars' existence. It also explains the prominence of vaanars in Ramayan:

I will keep the story brief; Once divine sage Narad performed supreme ascesis and claimed his victory over the senses, including lust. He bragged in front of Bhagwan Shiv & Vishnu, who sensed his arrogance. Vishnu decided to free his worshiper from arrogance in near future.

Days passed; Narad was roaming usually in the airways. There he saw a princess, VishwaMohini, whose beauty seemed to have enthralled all three worlds. Narad was instantly smitten by her beauty. He came to know about a swayamvar(where a bride chooses her husband) that the king was organizing.

Narad hurried to Vaikunth and pleaded Vishnu to bless him with 'Hari'-Roop. Hari is another name of Vishnu and Narad wanted his form, to look distinctive in the swayamvar. Vishnu blessed Narad with the Hari-Roop. Narad returned to the swayamvar, finding other devas, and Vishnu as contenders. He was confident of his winning, soon VishwaMohini arrived, walking by each contenders. Narad proudly stood in front of her, but to his astonishment, the princess walked over him and chose Vishnu as her husband.

Narad was dazed, how can his Hari-Roop be ignored by the princess. He looked in the mirror and found the Hari-Roop that he was graced by Bhagwan Vishnu, was of a vaanar's. Enraged, he confronted Vishnu and cursed him, 'the way I have suffered the pain, losing the woman I loved,  you too shall suffer the separation of your beloved. Hey Narayarn, on that time, you will seek vaanars' help and only they would be able to assist you in getting your beloved back.'

At that instant, VishwaMohini came to her real form, Bhagwati Lakshmi.
Vishnu smiled, 'You are my devotee Narad, how could I see you in captive of arrogance. You have bigger role in this creation and I had to get you free from the illusions and hence I planned it. You asked me Hari-Roop. Well! Hari's one meaning is also vaanar and hence you got it. I accept your curse as it will be helpful in my next incarnation. Now you're free of all evils.'

Narad bowed in Bhagwan's feet and left, learning a lesson.

Now, if we connect the dots; Hari as foremother of vaanars & the 'Hari'-Roop blessed by Bhagwan Vishnu to Narad, we know why & how 'Hari' means vaanar. This story also clears that vaanars were indeed a species existing, but like any other ordinary race, insignificant one, till Ramayan.

We will meet soon with my next post, exploring some legendary vaanars; till then, be curious.

"This whole creation is his maya/illusion; what's real or unreal, doesn't matter"