We will start from where we left last week; to the southern:

After being briefed up well, Vinat bowed to Sugreeve and Shri Ram; he pledged to abide by the directives and would search out the eastern direction, described by the vaanar king. Sugreeve too, had full faith in Vinat, and wished him best for his endeavor.

It was now time to ready the second team. This time Sugreeve turned to not one, but three vaanar chiefs.

Team South:
Vaanar Leaders: Angad, Hanuman & Jambvaan. While sending the vaanars, Sugreeve knew that if there's one direction, where the probability of Devi Sita's presence is higher, that direction would be the southern. Hence he chose not one, but three vaanar majors to lead the front. As the trio represented zeal, vigor & experience respectively.

Places Mentioned: Sugreeve briefed the trio about the places they were about to visit in their journey towards south. Their voyage would start from the great ranges of Vindhya Mountain; thousands of Vindhya's peaks that were fountainhead to rivers like Narmada, Godavari, Mahanadi and other rivers including Varada. They needed to be looking keenly over kingdoms viz. Mekhal, Utkal and Darshaarn as well as Aabravanti and the Avantipuri. Going further the team had to visit Vidarbha, Rishtik, Ramya Mahishak, Kalinga and Kaushik and other districts. Sugreeve cautioned them about the abstruse Dandkaranya, and  informed about the forthcoming empires; Aandhra, Chol, Pandya, Keral and other kingdoms which would be crucial in their search. Mount Ayomukh, enriched with different metals, was known for its lofty peaks and its forests embedded with sandal trees was their next spot.

Sugreeve further enlightened them about the Kaveri River, where the nymphs visit routinely. The river initiates at the peak of the Malay mountain. Going forward they would reach Tamraparni River;  he advised them to consult the revered sage Agastya there. The region near to it was known for the sandal forests. After traversing the aromatic sandal forests, they would reach the edge of the sea. Sage Agastya had installed a fine-looking Mountain Mahendra; which could be identified by its unique peak and astonishing but appealing trees. Embellished with gold, the great mountain was deeply rooted into the sea. Devas, sages, yakshas as well as the nymphs visit there often, to pleasure its beauty.

Beyond Mahendra Mount was the Great Sea; but there were lands farther and a particular island beyond that sea was the vaanars' prime consideration. LANKA, kingdom of Raavarn, king of the raakshasas. Hence, Sugreeve told them to be attentive while exploring as they might get something concrete there, may be Devi Sita's exact locale. In case of her not being there, Sugreeve informed them about the lands and mountains beyond Lanka.


Passing over Lanka, the next destination was Pushpit Mountain, that has a 100 yojan of spread. Post Pushpit, another mountain that was merely 14 yojan in distance from Pushpit, Suryavan Mountain. After crossing Suryavan, the next mountain/place to follow was Vaidyut Mount.

Next to follow was Bhogwati, city of the nags. The legendary kingdom, unassailable due to its borders safeguarded by vigorous and venomous serpents. The infrastructure of Bhogwati was exquisite, clean and broad roads, lush greenery. Its denizens wandered in human as well as hybrid forms. Vasuki, the naga emperor, rules the entire naga species from there. An extraordinary mount, Vrashabh would proceed Bhogwati. The place was source to precious gems along with diverse breeds of sandalwood trees.

Crossing Vrashabh, they would reach the extent of the earth where those being reside who have won the heavens or who deserve the heavens.The terrifying ‘pitralok’ that is the capital of Yamraj himself. Hence, Sugreeve advised them to not go beyond Vrashabh and return from that particular point.

Today's Geography: Sugreeve directed them towards the south, according to his set parameters. The Vindhya mountain range is based at west-central India. Though we are aware of Narmada, Godavari & Mahanadi; I would like to elaborate for river Varada. Varada can be identified with river Wardha, which though originates from Madhya Pradesh, flows mainly in Maharashtra, including Wardha district, near Nagpur.


Mekhal was situated on the nearby regions of Bangladesh and Utkal is today’s Orissa. We are familiar with the names of Andhra, Chol (The Chola dynasty, particularly in Tamil Nadu) and Keral (Kerela). Vidarbha is the agricultural capital of Maharashtra. Kalinga, again Orissa where the extreme war took place between Ashok and the Kalinga kingdom. Dandkaranya is mainly believed as present day Maharashtra, along with adjacent regions of neighboring states. Mount Ayomukh can be directed to Kudremukh (Chikkamagaluru district), Karnataka, which too is famous for its iron ores; like specified for Ayomukh.

Kaushik district can be identified with the Kousika river, near Coimbatore. Tamraparni River can be traced in Tamil Nadu and Kerela, originating from the Pothigai hills. The Malay mount is believed to be in the Kerala and Tamil Nadu borders. Mahendra mount described at the edge of the sea is the one from where Hanuman ji took his legendary leap. Next came Lanka, today's Sri Lanka.

It is difficult to identify each and every location as described in the epic, and hence some of the locations/creatures haven't got their mention here. Albeit, I have included them in my forthcoming book, sequel to, The 7th Incarnation.

Though we can always give a shot; the Bhogwati puri mentioned here could be different from the 'Bhogwati Puri' situated in the Pataal, i.e. beneath Earth. There exists one other possibility, may be this was an alternative abode of the naags or rather, it was the surface point or gateway to the naaglok towards pataal; plausible hypothesis, till we know the actual. Australia seems probable if we try to locate Bhogwati in present times; why I say so? Vrashabh mount, that follows Bhogwati; now the sandalwood forests described here could be Santalum spicatum, the Australian sandalwood, edge of Southwest Australia.

The mountains, Pushpit, Suryavan & Vaidyut are said to be between Lanka and Bhogwati. Again, many inferences, which may take us closer. Consider this: 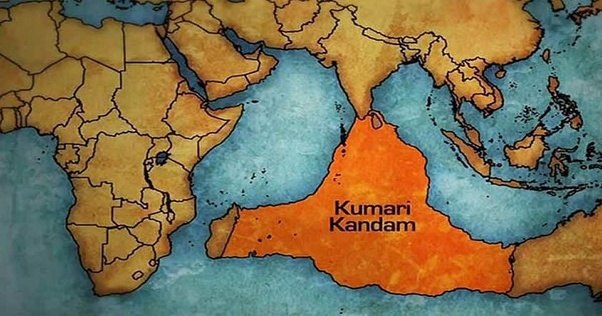 A mythical island that is believed to exist in ancient times, Kumari Kandam, now submerged. I used the word mythical as it is still in theory. But like Zealandia (a nearly submerged mass of continental crust that sank after breaking away from Australia 60–85 million years ago), this too could have historical relevance. And if yes, the mountains between Lanka and Bhogwati we discussed above, get traced here. With the possibility of Kumari Kandam, one may ask that there ain't sea between India & Lanka. We can presume that the northern part that conjoins with India & Sri Lanka was already under water; beginning phase of submergence.

Finally the 'pitralok' or 'Yamlok' which is stated at the southern pole, the 'netherworld'; may be its untraceable due to dimensional differences like the Sudarshan island at the far East , after all its the abode of a 'Lokpal' (guardian of southern direction in this case).

It would be unfair while we discuss the southern and don't mention a ground-breaking discovery (for the westerners & the ignorant) that made headlines everywhere, Ram-Setu: 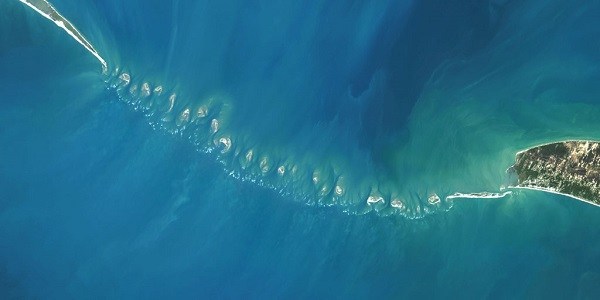 Science Channel, an American digital cable and satellite television network that is owned by Discovery Communications, recently posted a video that showed images by a NASA satellite, and according to the investigation the bridge is a line of rocks that stretched around 30 miles from India to Sri Lanka. The bigger picture; they finally accepted that it's man-made. Again confirming the authenticity of the epic, Ramayan.

Its sad when a foreign agency finally accepts it, yet a class of "intellects" that belong to this land, immodestly discard their own history calling it a hoax, a mere imagination. With their own agendas, they rubbish 'Ramavtar' in Ayodhya, in spite of the excavations by ASI that clearly stated the truth. But like I have said it, 'In the end, it will be Satya shining the brightest'.

We will continue with other two directions in the coming blogs; till then, stay amazed.


"Ram & Ayodhya were, are & will always be inseparable, doesn’t matter how desperate, one tries to disprove, malign, politicize or communalize them; as Ayodhya is among the ancient kingdoms, served by the suryavanshees, by Shri Ram, who is beyond the shackles of religion & time. He is the absolute truth that no book/man can confute"