Whatever initiates, is destined for conclusion; and so  like another year, 2017 too came to it's closure, giving way to 2018. The gone year left us with memories, both joyous & regrettable, some ups & downs, some lessons to be learnt and above all, HOPE, to become better of what we were.

“While for some, endings bring joy, hopes and promises; some feel an unfillable vacuum. It all depends on our perspective, how do we wanna see the new beginnings”

But for us, here, the year ended with in a revelatory mode, paving way towards history. We not only did aware ourselves about Sugreeve's loyalty, but his astonishing knowledge of the contemporary world that not only awed us drawing relativity with modern geography, but also substantiated our beliefs, for Ramayan.

We have so far learned about the two directions (Eastern & Southern), and as we've stepped into the new year (with 11 months to go, it's still new year), time to learn about the remaining two directions.


Vaanar Leader: Sushern. Compared to the eastern & southern, direction WEST was much certain, but, complex and varied. Hence this time Sugeeve turned to someone who was tactical & judicious, Tara's father, an aged vaanar who looked suitable to head the team for direction west. Sushern was eulogized among the whole vaanar species for his prudence. To aid him, Sugreeve chose sons of revered sage, Marichi: Archismaan & Archimalya, they were both effectual vaanars who were there to serve their emperor along with their army. 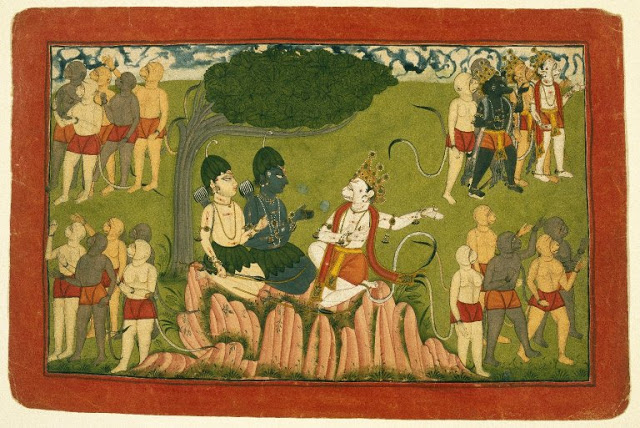 Places Mentioned: Sugreeve humbly bowed to his father-in-law, Sushern and apprised him and his newly formed team about the upcoming places on their journey towards West. They needed to start their exploration from Avanti kingdom followed by Anglepapuri and Jatapur; Sugreeve hoped these kingdoms might have some information associated with Devi Sita. Great Kukshidesh, that had an expansion of numerous cities under it, would come next; the kingdom could be identified with the trees of Bakul and Udyalak. Sugreeve cautioned them to stay alert due to dense forest area. Then the vaanars needed to search out the coastal areas and kingdoms viz. Saurashtra as well as Bahleek, Chandrachitra and other prosperous cities around.

Adjacent to Saurashtra & Bahlik, there was a large section of west that was desert, exceedingly vast viz. a viz. cold rocks and states surrounded by mountain ranges. Sugreeve told the vaanars to don't pay much heed there as Vaidehi won’t be held in reserve in that area. After the dried region, what followed next was the merging point of the sea and Sindhu River that the vaanars need to keep note of, for directions  purpose and to keep track of a mountain, Somgiri. The mount had 100 peaks and populated with giant trees. The pinnacle of sky scrapper Somgiri was gold-encrusted, which could be identified with strange trees. Sugreeve asked the vaanars to search the mount swiftly, but keenly. This sea was extremely hazardous, with dreadful creatures such as giant crocodiles, fishes known as ‘jal timi’ that were gargantuan and carnivorous; the vaanars needed to be careful while traversing.

Their next stop over was Pariyatra mountain. It was 100 yojan by dimensions and difficult for a common being to trace. Sugreeve assured them, with kapiraj Sushern's guidance they would be able to reach the mountain easily and can extend their search to every nook and corner. Simultaneously, Sugreeve warned them about the inhabitants of the mount, 24 crores ‘gandharws’ who could easily shape-shift, they were radiant as fire and very powerful. Since the gandharws didn't like intrusions,  the possibility of Raavarn keeping Devi Sita their was bare minimum and hence the vaanars needed to avoid exploring the mount and pass without getting into any trouble.

Next to the Pariyatra was the famous mountain named Vajra, bluish like a sapphire. The mountain had a 100 yojan widespread and a rock solid surface, like a diamond. With multiplicity of caves in Vajra Mount, Sugreeve told them to search every single cave carefully.

After traversing the Pariyatra & Vajra, the vaanars would reach another mountain, Chakravan and then Varah Mountain. Besides the immense shores, Varah was 64 yojans away from Chakravan. The Varah mount had a city known as Pragjyotish that was ruled by a daanav named ‘Narak’. Sugreeve asked the vaanars to maintain their search discreetly and when they are convinced, they must leave the mount immediately.

Passing Mount Varah, there came another mount that had plentiful of waterfalls that grace the mountain, Meghgiri. The mountain had an historical relevance, as it was here once, king of the devas', Indra'a coronation held. After crossing Meghgiri, the vaanars would further come across to a myriad of mountains that were source to gold and other metals. Amidst these mountains, stood Mount Meru that is worshiped by Vasus, Marudgarns along with other devas. A great sage ‘Merusaavarni’ resided there, an accomplished sage who achieved many powers through austerity. Sugreeve told the vaanars to bow to him with all humility and enquire about Janaki.

The last known point towards west was Astachal that was quite distant from Meru. A grand palace made by Vishwakarma at its peak, for Varun dev was the landmark explained by Vaanar Emperor.

Sugreeve asked his vaanars to return after visiting Astachal as it was the last known point to him and hence advised them to not risk their lives by trying to approach further.

Today's Geography: Sugreeve directed Sushern towards the West, according to his set parameters. The vaanars' journey here started from Madhya Pradesh, they covered the Avanti kingdom which is present time Ujjain, adjoining was Jatapur probably today's Jatapur, Khargone district. Kukshidesh  is Kukshi town under Dhar district, Madhya Pradesh. The Bahleeks were settled in the regions of Punjab, their reference here with Saurashtra (Gujrat) indicates that they extended their settlement to the Gujrat territory, or may be here Sugreeve here referred to both (Gujrat area of Bahlik as well as Punjab region).

The desert Sugreeve mentioned is by all means, Thar Desert, as it’s the only one nearby Gujrat, Madhya Pradesh and Pakistan. Post that he mentioned Somgiri mountain at the merging point of Sindhu River and the sea, which obviously would be the Arabian sea. Since eons have passed and geographical changes are obvious, along with rivers' route changes, we can only assume then location of Somgiri. But given directions indicate to either Kalo Dungar/Black Hill of Gujrat, or the Kirthar Range in Pakistan (which is more probable as Sindhu/Indus meets the Arabian Sea, Karachi).

Now comes The Pariyatra Mountain and here the mentioning of Gandharws makes things slight easy; since Gandhar (today's Kandahar, Afghanistan) was known as habitat to the gandharws, it shouldn’t come as amazement that this Pariyatra could be today’s Sulaiman Mountain range, southern extension to Hindu Kush Mountain that conjoins Afghanistan and Balochistan. Considering the number of gandharws given and the sea's proximity to the mountain, it is possible that the mountain stretch included the Makran-Siahon range too (May Be). While the Baloch issue's a hullabaloo everywhere, this fact could be a cause of bewilderment for many.

Next came the Vajra Mount, perhaps the Zagros range in Iran fits ,closest as it has a total length of 1500 kilometers, equivalent to described 100 yojans.

The Zagros extend to the North-West of Iran, preceding Turkey and Armenia. Mount Chakravan could be the Yereven city of Armenia, whose basic plan is, circular (in chakra/discus format). 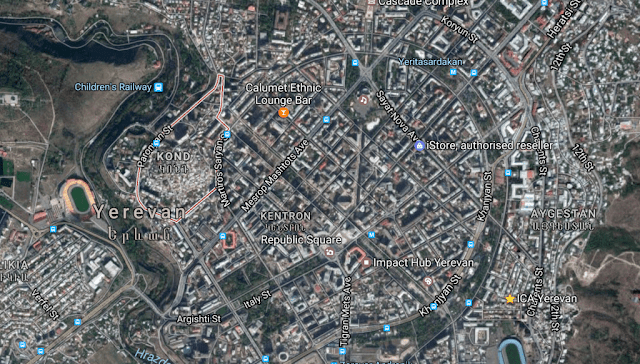 From Yerevan, around 750 kilometers distance is Mount Ararat, Turkey; now this would interest you that this distance is pretty similar to 64 yojans, the distance between Mount Chakravan and Mount Varah.

And now comes the flabbergasting, Mount MEGHGIRI. The descriptive legend of Indra's coronation here, caught my attention and the curious in me. Hitherto, we have reasoned Mount Varah's probable location as Turkey; hence the country that follows Turkey is...... GREECE, land of the Olympian Gods. And Indra's coronation in Meghgiri ring so many bells, as the mount is stated next to Varah, that is Greece. As stated by Pauranik (historical) legends, Indra is lord of thunder and devraj, i.e. king of the devas; and if we run into Greek mythology... yes, I know you see that coming too, Zeus, God of thunder, prime among the Olympians, is the Greek counterpart of Indra; no wonder why Zeus is the most revered deity there. If we are knocking the right door, then Meghgiri can be traced to Mount Olympus, the home to the Greek-Gods; as Mount Olympus is situated at Greece's eastern coastal area. 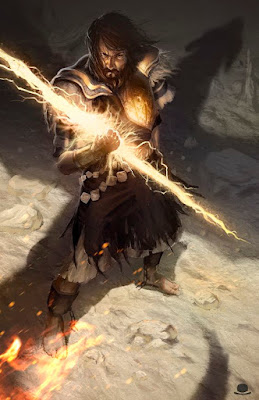 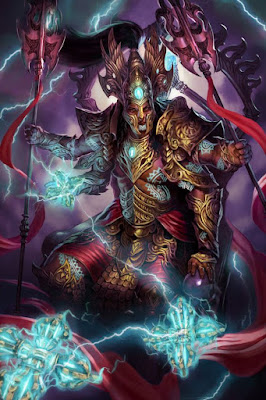 {Two Thunder-Deities, or a Deity with different recognition in Greece}
{Image: Pinterest}

It’s hard to describe or identify further, perhaps the regions of Africa may be. Mount Meru, the legendary and most revered is hard to trace but, FYI, there’s a mountain named ‘Meru’ in Tanzania, Africa. The Astaachal Mountain might be American Continent; but that needs further reasoning.

We will conclude the mini-series 'Sugreeve's Intelligence', next week, where some more astonishment awaits you, The Northern. Till then be curious, as that kindles the hunger, to know more.