We will continue from where we left in my last blog-post. Apart from the birth legend of Hanuman, I didn't went the usual way by describing his heroics since we already know about them; but decided to present some pointers that would do the real job in understanding his persona. The first and the only pointer in the last blog, Avatar, raised many eyebrows. But again, a fact is a fact, and so we knew, Hanuman wasn't Bhagwan Shiv's incarnation. Now continuing further, let's focus on other heads to learn more about, Bajrang-Bali: 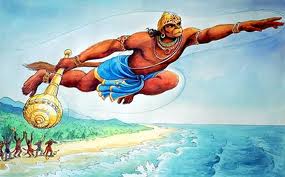 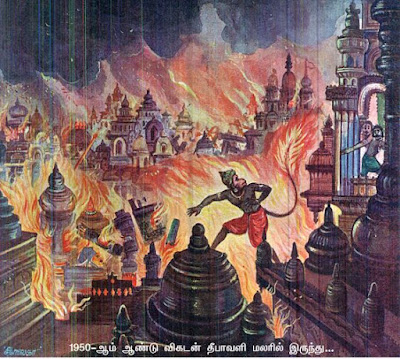 Now there are two aspects that come in people's mind: 1.) Did the fire hurt Hanuman and if not, how? 2.) Why were the innocent people of Lanka made suffer for Raavarn's offences?

Well for the first one, when Devi Sita was informed of Hanuman's punishment, she prayed Agni dev to keep Hanuman immune from his blaze; and it happened, after all, it was jagatmata's commandment. Even Hanuman was astounded to see the fire in his tail not affecting his skin.

For the second one, it's quite complicated, though not very. If you support a dictator/tyrant, it means you support him/her in all the sinfulness, and hence the justice that will be serviced, you too will be effected. And when Hanuman set Lanka on fire, everyone paid with their homes, their belongings and everything. Although, there's no mention of any casualty since everyone was awake and aware. In my second book(yet to be published) there's a detailed version of this episode that will help us understand better.

SO, if Hanuman wasn't an avatar but just a dev-putra, how come he was so famous and revered in comparison to others, even Bali & Sugreeve?

BOONS! Yes that could be the answer. Years ago, when little Maruti saw a red fruit in the sky, he jumped to fetch it in utter enthusiasm. With Vayu's help he flew towards the red fruit, i.e. the Sun. Looking at the prodigious Maruti coming towards him, Surya dev went calm on him. Indra, king of devas looked at it suspiciously and assaulted at Maruti with his vajra. The vajra hit Maruti's jaw; he fell on a mountain, lifeless. Vayu carried Maruti in his arms and blocked the air flows, which resulted in chaos. Brahmm dev then arrived with other devas and restored Maruti's life. With new life, and a broken jaw, he got a new name, HANUMAN. All devas, including Bhagwan Shiv endowed him with boons that made him peerless. A Godly status that was inaccessible for devas even.

Before we end, another aspect of his legend: 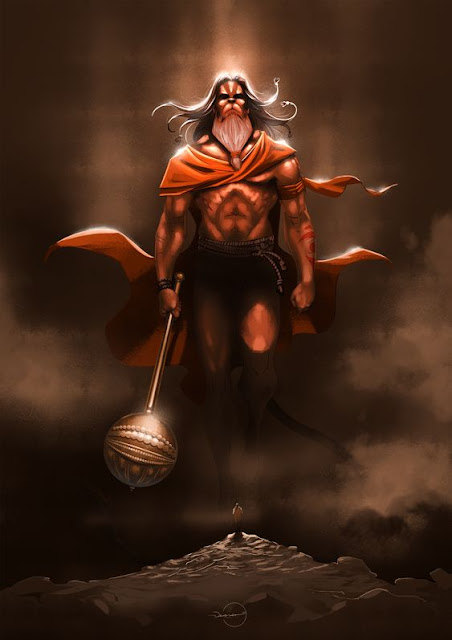 And so even today, Hanuman ji lives and is present wherever there's Ram katha in recitation. And he will be here till eternity, chanting Ram-naam. In his reverence, Tulsidas composed the legendary Hanuman Chalisa which is chanted with devotion in every house hold and is said to have spiritual benefits.


Hanuman ji and his bhakti towards Shri Ram cannot be describe in words, but can only be felt if we have the bhaav/emotion to understand bhakti.

With this, we come towards the end of the second season, which was based on my second book. We will meet soon, fo the third and the concluding, with some more revealing, astonishing & fascinating facts that will help us keeping a right perspective and a rational outlook. Till then, be curious & be proud.

"The only condition that bhakti has, is a truthful mind & heart; and then you will be closer to HIM"


[Visit my site, www.srirom.in to access my social profiles and explore more]
Posted by Rohit Omar at 7:44 PM