The region of Dandkaranya had always been synonymous to mystery that was hidden underneath the crust of dark and dense woods. This cursed land was always avoided by the kings of Aryavart as well as the king of other regions to safeguard them and their people form misfortune. When Shri Ram expressed his urge to visit the region, sage Atri warned him about the probable dangers that may confront him. Being aware of his divinity and the divine purpose, he provided a helping hand that later proved to be in welfare for the world.

When Shri Ram entered the Dandkaranya with Devi Sita and Lakshmarn; they were left spellbound with the amazing site as if they have arrived in some other realm. The place was teeming with the divine and amazing aura of the sages just like the solar arena shining at outer space; they had earned the brahmmvidya(divine knowledge) through disciplined approach and meditation.
Those groups of hermitages gave shelter to all kinds of beings, there premises were clean and tidy, there was a collective presence of wild animals and flocks of different species of birds. The place was filled with nature’s heritage, regular yagyas and ritual sounds had created enchanting surroundings. Beautiful flowers; rose, lotus and so many, used to enhance the exquisiteness and grace of that place. 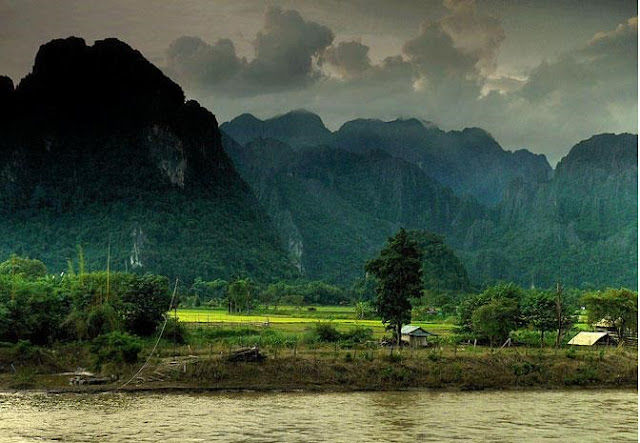 The sages were amused to see all three of them with such charm and grace as being forest dwellers it was quiet unnatural for them. Shri Ram introduced him to the sages; as they came to know about him, their souls were filled with new hopes. So far these sages were tormented by the evil rakshasas. Being non-violent and highly tolerant they were unable to defend theirselves, resulting in genocide of those sages.

They joined their palms, ‘hey Raghunandan, this whole Earth comes under Suryavanshees’ sovereignty and here, you are their representative. As you are here in this Dandkaranya, we request you to be aware as well as protect us from these demons and reinstall justice. We have won our anger and other senses; hence we have stopped punishing the offenders, now tapascharya is our only asset.’
{Valmiki Ramayan; Aranya Kaand; Chapter 1; Verse: 18-21}

We can here infer from the above stated about the firmness of character shown by the sages, they were being hunted, slaughtered, yet, they never gave in, never used their tapascharya/ascetic powers for violence.
Shri Ram was well aware of the gravity of the situation, it was the only reason he chose Dandkaranya as his destination. The rakshasas under Raavarn’s shelter had based in the forest regions of the Dandkaranya and were endorsing unethical practices along with tormenting the sages. While preparing for the exile, Shri Ram also prepared himself strategizing as to how he would approach this region. The persecution of the rakshasas was well known. It was time for him to execute the very motive of his incarnation as well as installing dharm and expanding the ambits of Aryavart for the world’s benefit with the elimination of Raavarn.
You must be wandering how come a cursed, haunted place be so enthralling. Yes a curse has it's dreading effect, but when dharm enters there, a wave of change powered by truthfulness and sanctity does wonders. After the place went desolated, for years no being dared to enter or habitat at this place, the civilized province transformed into jungles. It was then the saints of those times settled there due to the natural abundance, there wasn't any interference of any being be it humans or asurs or any. A recluse saint wants peace and that is what they found in the Dandkaranya, it was an ideal haven for the sages who were not into preaching but only penancing to the almighty, though they always welcomed if anyone approached them and that is how the place became divine.
Later, when Raavarn appointed Khar there, the situations changed.

Yes, the place again became dreadful due to the rakshasas, yet, it were the saints' presence that preserved the holiness of the land; reminds me the story of Ahilya, the cursed woman who was emancipated by Shri Ram. I bow to the holy land of Maharashtra, since those times, there have been numerous saints those have directed mankind towards the right path. Saint Gyaneshwar, Tukaram, Eknaath, Sai Baba of Shirdi and many who originated from this land.

"A pious mind is unaffected by curse/misfortune, it in fact has the power to cleanse/to redeem"