Every story has characters that are compact, yet power-packed enough to turnaround the whole plot. In Ramayan, Shurpnakha was one such character; in a way she was the invisible catalyst to the legend. You won't have seen her lasting more than two or three episodes, still she is remembered for her trickery. Now you might be thinking what's so special about her, why need to discuss her. Lets try to know more of her:

Born to sage Vishrava and Kaiksi, she was half brahmarn and half rakshasi like her brothers: Raavarn, Kumbhkarn and Vibhisharn. She was a fine enchantress and an expert shapeshifter, she possessed many magical powers though not as powerful as compared to her brothers. She was married to Vidyujjihv, a daanav king who ruled the Ashm kingdom situated in Pataal. Raavarn later presented her the abandoned and cursed Dandkaranya as a strategic point to rule, accompanied by Khar, their cousin.

Now we know her, the reason I am mentioning her today is due to the episode where Lakshmarn chopped her nose and ears. According to some 'intellectuals', the episode was twisted as it was an act of coercion. I sometimes wonder had those critics discovered the "Time-Machine".

So what happened actually and where was her husband when the misery descended on her. 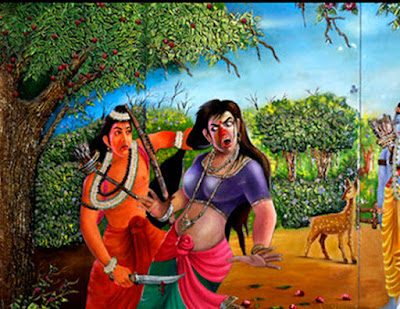 The story was this much only that was always outstretched senselessly as you can see now. It was not the first time Shurpnakha would have tried her hands on a handsome male to fulfill her desires.
But wait, there's more:

Humiliated, Shurpnakha went to report Khar and dared him to fight Shri Ram. Khar attacked Shri Ram with all his army and at the end got eliminated. Shurpnakha now realized about Shri Ram's force, she now knew no one in this world can match to his caliber. Still, she went to Raavarn and asked him to avenge her humiliation, she went further and told him about Devi Sita. Raavarn, a womanizer and known for his lechery, instantly fell for her words and was mesmerized with the description Shurpnakha gave about Devi Sita.

Though Raavarn was her dear brother and she respected him for all reasons, but he was also the one who killed her husband. The rakshasi knew if two great warriors will collide, definitely one will fall and her revenge will be delivered either-ways; is that so, you decide.

See you next thursday.


"Truth has only one shade, divine white; humans tend to color it in their accordance"


[Book is now available for your read: