When Raavarn returned from his global conquest, whole earth was under his domain by then. Every being from devas to the daanavs, he masticated his opponents in the war-field with all barbarity he could. Though the kingdoms worked independently and they didn't have to pay him taxes or any such loads, it was just that they all had accepted his sovereignty.

But, within all his winnings, one war haunted him to sweat; the war with the suryavanshees. The conquest of human kingdoms outside Aryavart was way below his status, as they were no where close to his power. Even in Aryavart, kings like Gaadhi, Pururuwa and others accepted his sovereignty. I must tell you these were no usual kings, they had their influence among even the devas.

Raavarn then challenged king Anararnya of Ayodhya. The suryavanshee king not only accepted his challenge but also gave him the fight he remembered forever. Anararanya with his amazing bow thrashed Raavarn's army, his all commanders ran away from the combat. Raavarn some how managed to win the battle eliminating Anararnya. The suryavanshee king cursed him before dying, that someone from his lineage only will end his terror.

Raavarn asked immunity from every species but humans from Brahmm Dev, 'puny, meager creatures, what bad can they do to me' his thoughts were. Now, worrisome, he had to be-known of  every incident happening in Aryavart.

One might be thinking where is it leading to, my apologies for a long prologue, but it was the need of the hour. Following information will enlighten as how KHAR was important to the legend:

The first thing Raavarn did was to chose a strategic point; to put an eye over every kingdom that were under his dominance. For this purpose, he chose Dandkaranya (also known as Jansthan), a civilized province once. Due to an offense committed by its king, it was demolished by sage Shukracharya's curse.

After choosing Dandkaranya, Raavarn appointed his cousin Khar and maintained his dominance through him, he was the best choice who could be used for both as hawk-eye as well as a bait in case of any strike from the opponents, to asses their powers as no usual foe could face Khar's strength. 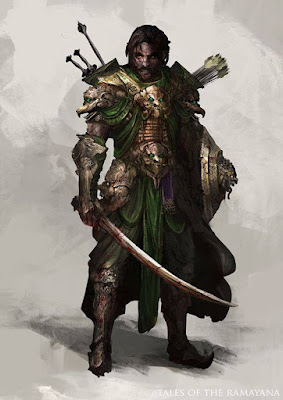 Khar, son of Raavarn's mother's sister, was an expert strategist and warrior.  By the order from Raavarn, he saw to it that the terror remains over the kingdoms, if any rituals viz. the yagyas were carried in order to strengthen the devas, he straight away sent the demons to demolish those. He had a well-spread spy network through-out the kingdoms from where he used to get all the information required. The sages who used to penance in the area of Dandkaranya or near by, were slaughtered by him, each one that looked like a possible threat to Raavarn's empire.
Following illustrations will make the concept clear:
Though in Ramayan, we don't see much of Khar as he remained behind the curtains. Yet, he was the one who extended the dread installed by Raavarn by persecuting the innocent beings who ever tried to base in the regions of Dandkaranya, the sages who were not as accomplished as Agastya, Atri etc. were tormented and later slayed on his instructions.
He was always updated through his spies about the ongoing activities in Aryavart. Even Dashrath expressed his weakness to Vishwamitra in fighting the demons to save the latter's yagya, this illustrates the extent to which the kings were scared of confronting him. Khar always avoided in confronting Shri Ram as he knew about the Shiv-Dhanush bhang followed by lifting of  Vaishnav-Dhanush as well, but when Shurpnakha came to him, he decided to end this.

Au contraire, Shri Ram ended his torment and uprooted the rakshas empire installing dharm. I will end by what Shri Ram stated :

"Hey Nishachar! You came here with all the show off you could,  now look at your plight, you were always inspired from ‘kaam’ and ‘krodh’, persecuting the beings of the three worlds. Such a person or being never attains peace and success in his or her whole life"

Thus started the chain of events, which resulted in destruction of Raavarn.


[Book is now available for your read: